A1180, A1181, A1182, and A1183: Sensitive Two-Wire Field-Programmable Chopper-Stabilized Unipolar Hall-Effect Switches 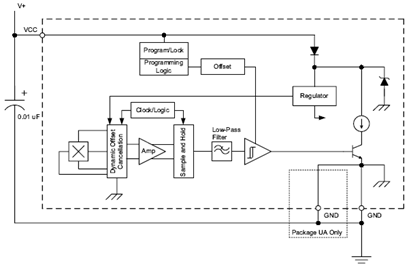 This device is no longer in production. The device should not be purchased for new design applications. Samples are no longer available. Date of status change: October 31, 2011.

Recommended Substitutions: For existing customer transition, and for new customers or new applications, refer to the following parts:

The A1180, A1181, A1182, and A1183 devices are sensitive, two-wire, unipolar, Hall-effect switches. The operate point, BOP, can be field-programmed, after final packaging of the sensor and placement into the application. This advanced feature allows the optimization of the sensor switching performance, by effectively accounting for variations caused by mounting tolerances for the device and the target magnet.

This family of devices are produced on the Allegro MicroSystems advanced BiCMOS wafer fabrication process, which implements a patented, high-frequency, chopper-stabilization technique that achieves magnetic stability and eliminates the offsets that are inherent in single-element devices exposed to harsh application environments. Commonly found in a number of automotive applications, the A1180-83 family of devices are utilized to sense: seat track position, seat belt buckle presence, hood/trunk latching, and shift selector position.

Two-wire unipolar switches are particularly advantageous in price-sensitive applications, because they require one less wire than the more traditional open-collector output switches. Additionally, the system designer gains inherent diagnostics because output current normally flows in either of two narrowly-specified ranges. Any output current level outside of these two ranges is a fault condition. The A1180-83 family of devices also features on-chip transient protection, and a Zener clamp to protect against overvoltage conditions on the supply line.

A1180, A1181, A1182, and A1183 devices are offered in two package styles: LH, a SOT-23W miniature low-profile package for surface-mount applications, and UA, a three-lead ultramini Single Inline Package (SIP) for through-hole mounting. Each package is available in a lead (Pb) free version (suffix, –T) with 100% matte tin plated leadframe.