By Richard Dickinson and William Bentley

The highly compact Hall effect current sensor ICs without concentrators that are now available make it possible to enhance performance of small-current differentiation by simple layout steps and shielding the device from extraneous magnetic flux along its primary sensing axis.

The ACS71x families of Hall effect-based electrical current sensor ICs measure current by sensing the magnetic field it generates as it passes adjacent to the Hall element (see figure 1). They measure this field directly, without the use of a magnetic concentrator, which is a common feature in other magnetic devices (for example, in the Allegro® MicroSystems CA and CB packages, used for the ACS75x families of current sensor ICs). 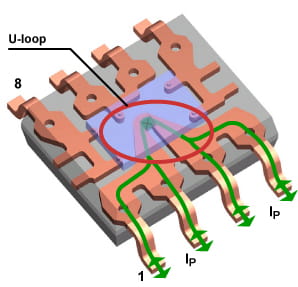 Figure 1. Current Path in an ACS71x device. Current passes in either direction through the U-loop and around the Hall element (X). The U-loop is mounted underneath the die in the SOIC8 package.

The lack of a concentrator has the advantage of nearly eliminating magnetic hysteresis as a source of error in the IC. However, this also leaves the ACS71x devices less shielded from external magnetic fields that could distort the current measurement. In applications where large magnetic fields may be present, care must be taken in the alignment and spacing of the Hall element relative to those fields. Shielding the device may also be desirable in some circumstances.

Flux lines form circles around a conductor in planes that are orthogonal to the direction of current flow through a conductor. The Hall element only responds to the flux component that is perpendicular to its surface, and is only susceptible to magnetic fields in this direction. As shown in figure 2, although the path of the primary current, IP, is in the same plane as the Hall element, the magnetic flux vectors generated by current passing through the U-loop are perpendicular to the Hall element plane. Those that intersect the Hall element induce a voltage across it, which is then amplified and used to generate the output voltage. 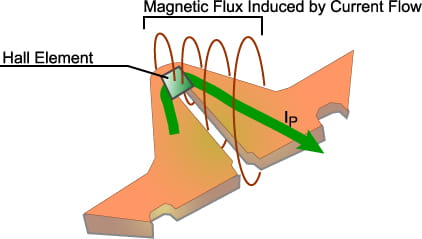 Figure 2. U-Loop and Hall Element. Current flowing through the U-loop generates flux lines in planes orthogonal to its path. Flux perpendicular to the plane of the Hall element can generate Hall voltage.

High-current conductors in the vicinity of the device should be, if possible, oriented perpendicular to the plane on the board on which the device package is mounted. This is shown in figure 3. With this alignment, the magnetic flux would circulate in the plane of the Hall element rather than through it, and have little effect on the output of the Hall IC. 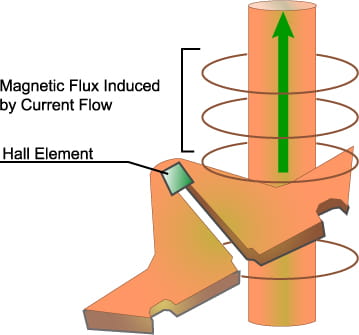 When laying out a PCB where the ACS71x device will be mounted, it is good practice to keep as much space as possible between the device and other traces carrying significant amounts of current. Figure 4 shows the measured effect of an adjacent current trace on the same side of the PCB as the device. Although this is a consideration for optimizing designs, the effect of the neighboring trace is small and much less than the signal generated by the current being measured within the device. 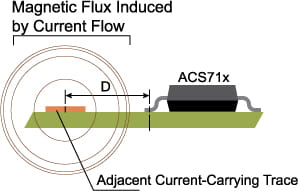 Figure 4. Adjacent Conduction Traces Carrying 50 A, Effect on an ACS71x device. The minimal influence of magnetic effects from an adjacent trace diminish rapidly as the distance, D, is increased.

If greater protection against external fields is needed, a surface mount magnetic alloy shield covering the device package is recommended. A shield such as the one depicted in figure 5 shunts external magnetic flux away from the SOIC8 package, and results in no significant effect on the magnetic field generated inside the package around the primary current path. Typical magnetic field results are depicted in figure 6.

Figure 5. Simple Shield. This design provides protection against perpendicular magnetic flux lines impinging from above an SOIC8-packaged Allegro current sensor IC. If necessary, a second shield can be placed on the opposite side of the PCB.

The shield can be fastened to the PCB by epoxy, and is it not mandatory that it have a conductive path to ground. Because the Hall element is not susceptible to flux lines parallel to its plane, it is not necessary to enclose the sides of the shield. In fact, leaving the shield open in the vicinity of the IC leads is preferred for creepage and clearance considerations.

In cases where a high level of shielding is required, a second shield of a similar type can be attached to the underside of the PCB, protecting the Hall element from the perpendicular flux passing through the PCB from below.

An experiment was performed with ±240 G applied perpendicularly to the Hall element of an 8-pin device package, through the use of an air core field source. The attenuation levels achieved by shields constructed of various ferrous alloys and material thicknesses were recorded. The results are provided below. Two types of ferrous alloys were used, silicon steel (SiFe), and HyMu alloy, which is a generic class of alloys that have a high magnetic permeability level, µ. It should be noted that in most applications the Hall element will not be exposed to field levels as great as 60 G. For example, up to 60 G of field would pass through the Hall transducer only if the ACS71x were placed within 6 mm of an adjacent busbar carrying 500 A.

The alignment, spacing, and shielding techniques described in this note may be used as increasingly aggressive steps to mitigate the effects of external magnetic fields when applying ACS71x current sensor ICs.

If you need further assistance in dealing with the effects of external fields, please contact your local Allegro sales office to be put in touch with one of our applications engineers.