David A. Ramirez, Majeed M. Hayat, Department of Electrical and Computer Engineering and the Center for High Technology Materials, The University of New Mexico;

This article is based on: D. A. Ramirez, M. M. Hayat, A. S. Huntington and G. M. Williams, “Non-Local Model for the Spatial Distribution of Impact Ionization Events in Avalanche Photodiodes,” in IEEE Photonics Technology Letters, vol. 26, no. 1, pp. 25-28, Jan.1, 2014, doi: 10.1109/LPT.2013.2289974. © 2014 IEEE. Personal use of this material is permitted. Permission from IEEE must be obtained for all other uses, in any current or future media, including reprinting/republishing this material for advertising or promotional purposes, creating new collective works, for resale or redistribution to servers or lists, or reuse of any copyrighted component of this work in other works.

An extension of the analytical Dead Space Multiplication Theory [IEEE Trans. Electr. Dev., vol. 39, pp. 546–552, 1992] is reported. This extension provides the means to analytically determine the spatial distribution of electron and hole impact-ionization events in an arbitrarily specified heterojunction multiplication region. The model can be used to understand the role of dead space in regularizing the locations of impact ionization. It can also be used to analyze, design, and optimize new generations of ultra-low-noise avalanche photodiodes with multi-staged gain based on judicious energizing and relaxing of carriers to enhance electron impact ionizations and to suppress hole impact ionizations.

Avalanche photodiodes (APDs) are widely deployed in high-data-rate optical-fiber communication and lidar systems that operate at the wavelengths of 1.3 µm. Among the APD structures, the separate absorption, charge and multiplication (SACM) InP-InGaAs APDs have been the preferred structure for two reasons. First, they have high sensitivity, which results from their internal carrier multiplication, namely the avalanche of impact ionizations that result from each photogenerated carrier. Second, they are highly cost effective compared to receivers that employ optical pre-amplification. However, due to the stochastic nature of the impact-ionization process, the multiplication gain comes at the expense of extra noise. This multiplication noise is characterized by a quantity termed “the excess noise factor,” which accounts for the gain uncertainty.

This paper reports an extension of the analytical Dead Space Multiplication Theory (DSMT) [7] that enables determination of the spatial distribution of impact-ionization events within an arbitrarily specified heterojunction multiplication region. The recursive equations reported allow the number of electron and hole impact-ionization events to be determined individually within any subregion of the multiplication region. Moreover, the model can accommodate carrier relaxation, which can be used to suppress the impact ionizations of one type of carrier.

where de(x) and dh(x) are the electron and hole dead spaces, respectively. The exact formulas for calculating the dead space can be found in the work of Hayat, et al. [2]

Next, a renewal argument is invoked, similar to that introduced by Hayat, et al., [8] to obtain recursive (integral) equations for the mean of the quantities Ze(x) and Zh(x), Ye(x) and Yh(x), denoted as ze(x) and zh(x), ye(x) and yh(x), respectively. Consider a parent electron at x initiating the avalanche process, and suppose that its first ionization occurs at some location ξ > x.

where the first term is simply the probability that the first ionization occurs in region A. The same argument can be repeated to analyze the ensemble averages of the quantities Zh(x), Ye(x), and Yh(x); such analysis leads to three additional integral equations:

The calculated spatial distribution of the impact-ionization events initiated by electrons and holes in an InP homojunction multiplication region of 150 nm under a constant electric field is shown in Figure 1. Parent holes are assumed to be injected at x = 0. The figure shows that the number of hole-impact ionization events increases as the holes approach x = 150 nm, and the number of electron impact-ionizations events increases as the electrons approach x = 0. This result is consistent with the fact that holes and electrons multiply as they acquire sufficient kinetic energy from the electric field as they travel in opposite directions. More importantly, the figure shows the effect of the dead space on the spatial distribution of the impact-ionization events. 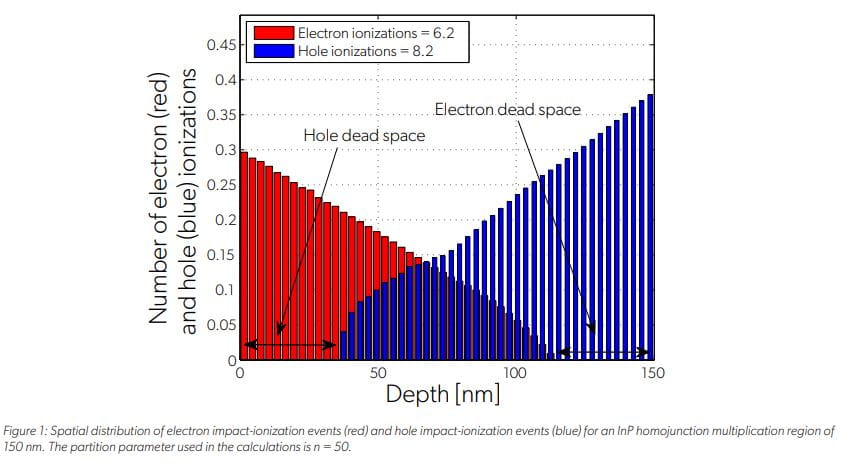 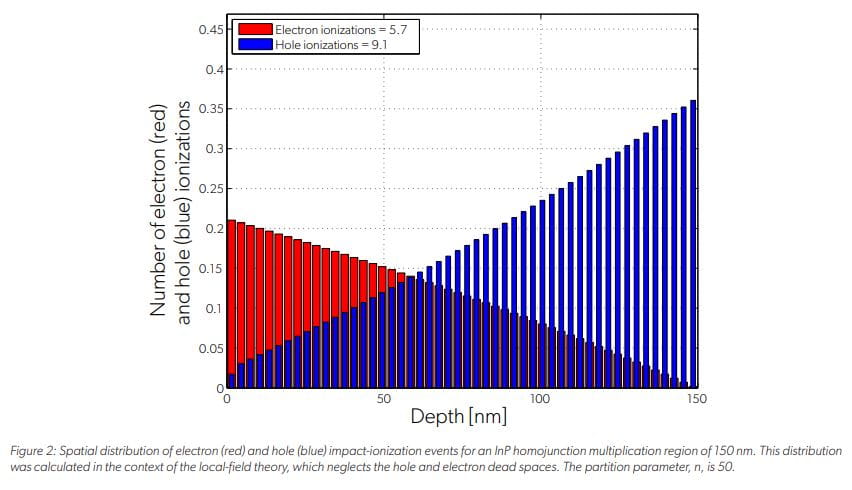 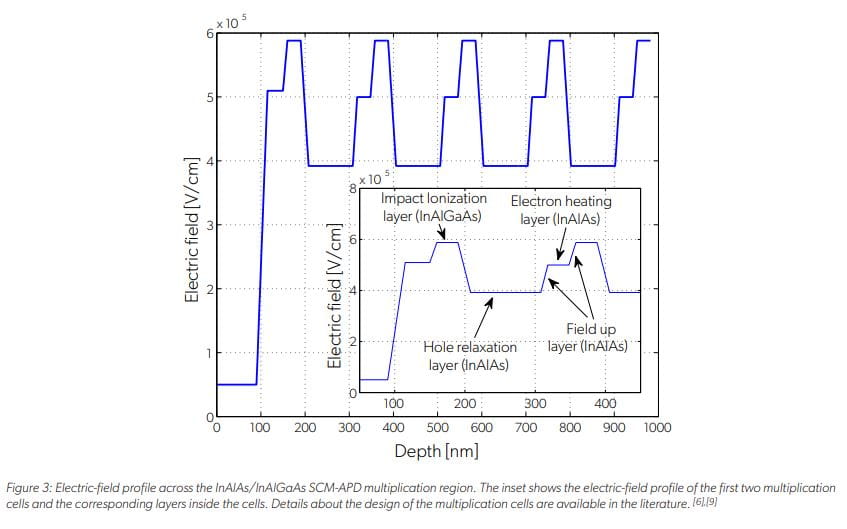 The distribution of the electron and hole ionization events across the multiplication region (from Figure 3) are plotted in Figure 4. The plot shows impact-ionization events in the lower bandgap and high ionization rate layers (InAlGaAs), which are the layers where the electric field is at a maximum. The plot also shows the large difference between the number of electron impact ionizations compared and hole impact ionizations. This disparity is a result of two factors: 1) the hole-relaxation layers, which prevent the holes from acquiring sufficient kinetic energy to impact-ionize and thereby reduce excess noise; and 2) the electrons, which are pre-heated prior to injection into the InAlGaAs layer. These results are consistent with the Allegro simulation results reported by Williams, et al. [9] 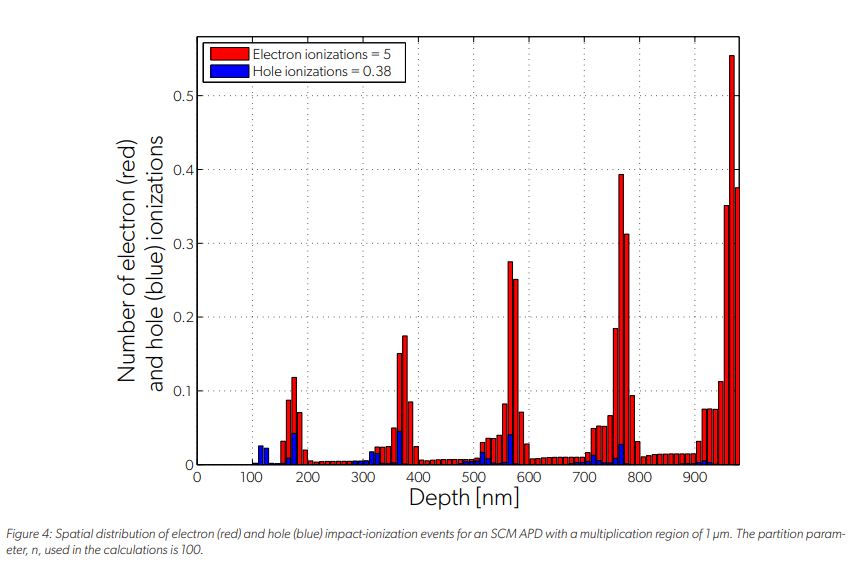 The analytical recursive model presented here enables the distribution of electron-ionization events and hole-ionization events to be determined separately, as the avalanche process is triggered by either a parent hole or electron at an arbitrary location inside a multiplication region. The model can simulate a mechanism that suppresses the impact ionizations triggered by one species of carrier to enable determination of the effect of single carriers on localized impact ionizations. The new model is a crucial analytical tool for understanding, designing, and optimizing new generations of APDs designed to achieve ultra-low noise characteristics by enhancing impact ionizations for electrons while suppressing impact ionizations for holes (or vice versa, as may be desired).