Advanced technologies based on proprietary algorithms—such as QuietStep found in Allegro’s A5984 microstepping motor driver—are now available to minimize noise and vibration in stepper motor designs by reducing torque ripple and current distortion. Before delving into these motion control solutions, it’s helpful to understand what causes vibration and in turn audible noise, starting with how a stepper motor operates.

A bipolar stepper motor is a DC motor with discrete pole positions constructed of multiple coils arranged in two groups called phases. The current ratio between the two phases determines how the rotor is positioned between the two windings. In this way, a stepper motor can divide its position between two poles into smaller increments called microsteps.

In the time-based domain (Figure 1, left), the torque is defined as the sum of the area under the two curves. In the polar domain (Figure 1, right), the magnitude of the vector is the torque. In these images, the torque can be seen as constant as the field moves through each electrical cycle. When torque is not constant, the system experiences vibration and audible noise.

Assuming the motor is not operating at resonance, torque ripple becomes the biggest source of audible noise and vibration in a stepper motor.

Pulse-width modulation (PWM) current control is the most common way to drive a stepper. By implementing current control, the controller PWM chops the output, limiting the current in each winding to maintain a ratio that defines the rotor position.

The nature of PWM current control results in current ripple based on the applied duty cycle, the inductance of the motor, and the voltage across it. To minimize ripple, the controller can manage how the current decreases in the windings by implementing various decay modes. 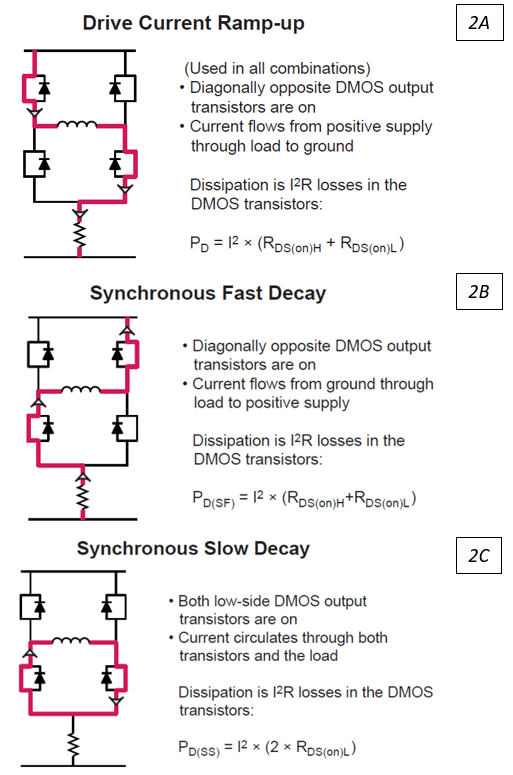 Fast decay provides optimal current control but results in high ripple. Slow decay results in low ripple, but the rate of decay is subject to the motor’s back electromotive force (BEMF), which in some cases can create distortions in current. 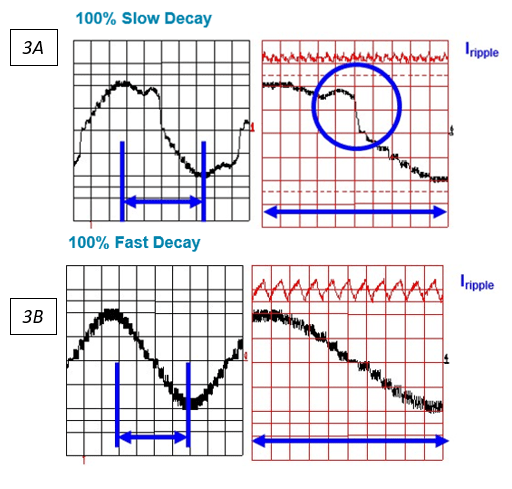 Figure 3A Slow decay can produce distortion when current in load is decreasing.
Figure 3B. Fast decay causes large ripple current, which can result in vibration and audible noise.

The effects shown in Figure 1 can be avoided while also maintaining reasonable ripple current by reaching a compromise. When the current is decreasing in the load, the driver implements a combination of fast and slow decay, known as mixed decay. The off-time is divided into a portion of fast decay and a portion of slow decay, as shown in Figure 4. When current in the load is increasing, slow decay minimizes ripple.

Figure 4. Mixed decay minimizes ripple while also maintaining control of the current in the winding.

Depending on a stepper motor’s characteristics and its LR time constant, slow decay on the rising edge can create issues at low currents where the rate of change in current is too fast for the PWM controller to regulate to low currents due to current sense amplifier blanking. This scenario can result in current distortion when the current in the load is increasing, as shown in Figure 5.

Figure 5. Slow decay on the rising edge can cause distortion in motors with certain LR characteristics.

It’s difficult to achieve an easy compromise that works for all bipolar stepper motors. To solve these issues while maintaining the lowest ripple possible, the system must adapt to different motor characteristics.

Allegro has introduced a novel way to reduce torque ripple and current distortion for stepper motor applications. This innovation, QuietStep, is now available as an option on Allegro’s latest A5984 stepper motor driver.

QuietStep technology uses a proprietary algorithm that dynamically adjusts (up or down) the percent of fast decay needed on a cycle-by-cycle basis to achieve the best possible performance under all operating conditions without using complex software.

The algorithm reverses the traditional approach to mixed decay by implementing slow decay first, followed by fast decay. Figure 6A shows traditional mixed decay with the fixed portion of fast and slow decay and with fast decay starting the PWM off-time cycle. Figure 6B shows how slow decay starts when using QuietStep at the beginning of the PWM off-time cycle. QuietStep automatically adjusts the ratio of fast and slow decay to minimize current ripple while maintaining accurate current regulation. 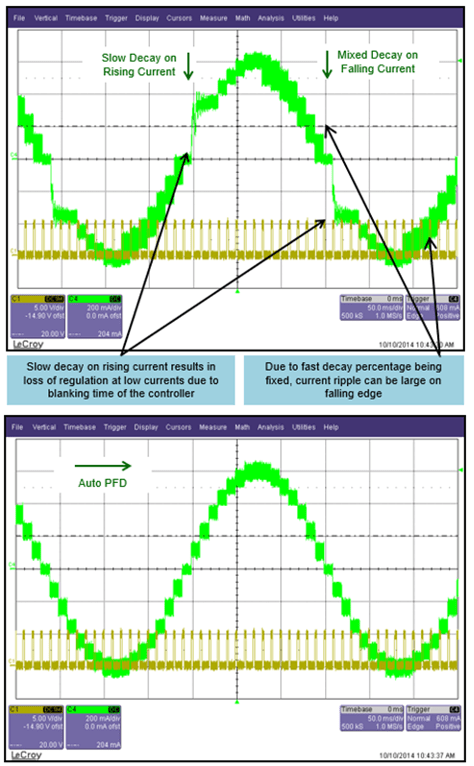 Reducing audible noise and vibration enhances nearly every motor control application, from home automation door locks and valve control to precision vision systems and 3D printing. Allegro’s QuietStep technology removes the hassle of trying to determine the source of noise and vibration in a system. Fully integrated into the IC, QuietStep is easy to implement, requires no programming or external components, and is completely automatic.

With microstepping motor drivers enabling this advanced technology, like the Allegro A5984, current waveforms are automatically optimized over a wide range of stepper motor speeds and characteristics. Stepper motor driver solutions, equipped with QuietStep technology, adjusts the amount of fast decay on-the-fly during a PWM cycle to minimize current ripple over various operating conditions. This feature improves system performance, resulting in reduced audible motor noise, lower vibration, and increased step accuracy. Utilizing this technology, the A5984 driver is designed to operate bipolar stepper motors from full-step up to 1/32 step modes and enables an output drive capacity of up to 40 V and ±2 A. Overall, an QuietStep algorithm allows for easier system design, implementation and operation.

To learn more about the A5984 driver and QuietStep technology, visit www.allegromicro.com/a5984

Allegro MicroSystems is a global leader in power and sensing solutions for motion control and energy-efficient systems. For more information, visit www.allegromicro.com.

Based on the article, “Minimizing Stepper Motor Noise and Vibration in Precision Motion Control Applications” by Dan Jacques of Allegro MicroSystems, originally published by All About Circuits, February 2021. The original article can be found here. Used with permission. For portions not copyrighted by original publisher, Copyright ©2021, Allegro MicroSystems, INC.