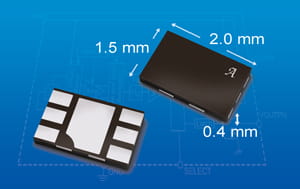 Figure 1. The A1171 package is a maximum 0.4 mm in overall height, ideal for thin phone designs.

As cell phone manufacturers begin to integrate more features into their models, the need for different mechanical configurations continues to expand. Micro-power Hall-effect sensor ICs are well suited for sensing the open-close slide positions given any phone configuration and are the most popular solution employed today in the market. Multipurpose phones often require sensing not only open-close, but also a third position, such as rotation, or flip-up in another direction. This note will show how to use the Allegro™ A1171 in a standard flip or slide phone, as well as techniques for sensing three positions using only one magnet and one Hall device in a multipurpose application.

In a standard configuration, a single Hall-effect IC and button magnet can be used to sense the open and closed positions.

In the closed position, the Hall IC, for example H as shown in figure 2A, is aligned with a simple button magnet, marked with its north (N) and south (S) poles. In this position, the Hall sensor IC output is latched in the on state, because the magnetic flux density is larger than the magnetic operate point of the device. In the open position (figure 2B), however, the magnetic field is sufficiently weak that the Hall sensor IC output is off. This simple technique is widely employed in both slide and flip phones.

Using an omnipolar IC switch promotes ease of manufacturing, because the magnet can be inserted without concern about which pole is facing the Hall sensor IC—either the north or the south pole can be used to activate the IC switch. In the figure 2 example, the south pole is activating pole, as it is placed nearest the Hall sensor IC, but with an omnipolar sensor IC, placing the north pole on that side would work equally well.

Figure 5 shows a simple block diagram of the A1171 dual-mode switch. The term dual-mode refers to the A1171 capability of operating either as an omnipolar switch or as a pair of unipolar switches. The A1171 works at battery voltages as low as 1.65 V, allowing its use in phones and PDAs with the latest single-cell Lithium batteries. It also has push-pull outputs to eliminate the need for external pull-up resistors. 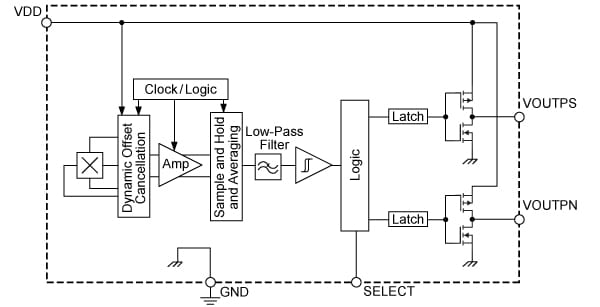 The state of the SELECT pin determines the mode of operation for the A1171. When the pin is floated or tied to VCC, the part operates in omnipolar mode, as in figure 3. When the pin is grounded, the A1171 operates in a unipolar mode, as in figure 4. Notice that in omnipolar mode (figure 3) the separate outputs are complementary, while in unipolar mode (figure 4) the separate outputs are south- or north-pole activated switches.

By using both outputs in unipolar mode, and orienting the sensed magnet, the A1171 can be used to sense three positions, supporting the broader range of articulating positions required in multipurpose phone applications. In unipolar mode, the VOUTPS pin is the output of a south-polarity–activated switch, and the VOUTPN pin is output of a north-polarity–activated switch.

A multipurpose application is illustrated in figure 6. When the phone is fully closed (figure 6A), such as in MP3 applications, the south pole of the magnet is opposite the Hall sensor IC. The output of the A1171 is VOUTPS low and VOUTPN high, corresponding to the B+ side of figures 4A and 4B.

In the slide-open position, used for the phone application (figure 6B), the Hall sensor IC is dominated by a north polarity field, and VOUTPN is low, while VOUTPS is high, corresponding to the B– side of figures 4A and 4B. Finally, in the rotate-open position, for texting or PDA use on a full keyboard (figure 6C), neither switch is subjected to a significant magnetic field, and both outputs are high (B = 0 in figures 4A and 4B).

The Output Truth Table summarizes all three phone positions and the resulting output states. This technique can be applied to rotating or sliding phones if mechanical placement and the sensing magnet are optimized.

This note has described how to use an advanced Hall-effect sensor IC, the Allegro A1171, to sense two separate positions in omnipolar operating mode, and to sense three positions by enabling unipolar operation. These ICs allow improvements in manufacturing cost and application footprint, because three positions can be sensed using only one magnet and one Hall device. Guidance was also provided on using one of the omnipolar outputs or both of the unipolar outputs of the IC: VOUTPS and VOUTPN, as well as selecting the operating mode by using the SELECT input. The A1171 is ideally suited for position sensing in simple slide or flip phones as well as in three-position sensing for multipurpose slide or rotating applications.