Magnetic sensors are used extensively in modern vehicles, serving to measure the position of moving parts, rotation angles, and the flow of electric current. The versatility, reliability, and economy of these contactless silicon-based sensors make them uniquely suited for automotive and industrial applications.

With the rise of vehicle electrification, computerized control systems, and subsystem reliability monitoring, it has become essential for systems to have accurate rotational information for each wheel of the vehicle. For decades, anti-lock braking systems (ABS) have relied on this information. Indirect tire pressure monitoring systems (iTPMS) detect abnormal tire inflation by calculating relative differences in wheel speed across tires. Traction control systems (TCS) maintain the stability of the vehicle by measuring wheel speed and adjusting power to keep the wheels rotating at a consistent speed. Torque vectoring brings dynamic vehicle control to incredible new levels by controlling the power applied to each individual wheel. And lastly, advanced driver assistance systems (ADAS), such as autonomous parking and collision avoidance, use wheel speed information for accurate and safe closed-loop control.

One of the most commonly used methods of transducing magnetic fields into usable electrical signals has been the Hall effect. Hall-effect sensor ICs incorporate “Hall elements,” which consist of a conductor (often doped silicon) through which current is applied, and side terminals that develop a voltage that is proportional to the magnetic field. Other circuits in the IC amplify the Hall voltage, convert it into digital information using an analog-to-digital converter (ADC), and apply digital processing to extract the most accurate signal and negate error introduced by temperature and offset effects. The end signal that a wheel-speed sensor IC produces consists of a series of digital pulses that directly correspond to wheel rotation.

Hall-effect wheel-speed sensors normally provide raw speed accuracy to within 0.5 to 2 percent, and an allowable air gap range of 2 to 3 mm, depending on the target used. These sensors have long met the needs of standard braking systems and offered the flexibility to sense ring magnets or ferromagnetic targets when paired with a back-bias magnet.

Within the last several years, we at Allegro have developed and refined state-of-the-art giant magnetoresistance (GMR) technology that excels in wheel-speed applications. Our GMR design produces more than 50 times the voltage of a Hall element when a magnetic field is applied, which translates to a monumental boost in signal-to-noise ratio (SNR). This allows the IC to sense at significantly larger air gaps and output a periodic signal with extremely low jitter. Allegro GMR uses what is called a “spin valve” architecture, which involves both a reference layer with a fixed magnetic orientation, and a free layer that aligns with the external magnetic field applied.

When a magnetic field is applied in the same direction as the reference layer, the GMR element has a relatively low resistance. When the field applied is perpendicular to the reference layer, the resistance of the element becomes higher. This change in resistance transduces the applied magnetic field into the electrical domain for the IC. At a physical level, the element’s magnetic orientation affects the spin state of the electrons, which affects the rate of electron scattering and consequently changes the element’s resistance (Cadugan, 2019).

Depending on the ring magnet target used, Allegro GMR wheel speed sensors can be used with air gaps as large as 4 to 8 mm. 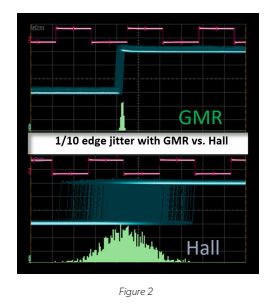 Reducing the amount of jitter translates to extremely accurate output that represents the precise motion of the wheel, down to as low as 0.02 percent of raw speed accuracy. This precision enhances iTPMS signal processing algorithms, making it possible to better distinguish proper tire inflation from abnormal conditions. Other advanced vehicle control systems can also benefit from the low-jitter speed signal. This breakthrough technology is already in high-volume production today.

Unlike some other magnetoresistive ICs used in the industry, Allegro GMR elements are monolithically integrated with the rest of the silicon for maximum reliability and minimal internal bond wires. Like their Hall-effect counterparts, GMR wheel-speed sensors also measure magnetic fields differentially to provide common-mode noise immunity and adaptability to changes in the system environment. Allegro wheel-speed sensors also accommodate a wide voltage range, are protected against reverse-battery conditions, are tested to standard electromagnetic compatibility (EMC) requirements, and are developed according to the ISO 26262 functional safety standard.

While driver-assistance systems such as cruise control, headlight angle correction, lane-departure warnings and rear cameras are common today, the industry is moving toward full autonomy for the future. This will take the form of autonomous parking, hands-free autopiloting, and eventually driverless taxis. The systems of tomorrow will require higher levels of safety scrutiny and sensor accuracy, and the Allegro team is constantly developing new technologies to meet evolving needs across industries and use cases.

We’re also innovating in gear tooth speed sensing, with the introduction of back-bias GMR technology. Offering unmatched large-air-gap performance and low jitter, this new technology is found in the ATS19480 (speed-only) and ATS19580 (speed-and-direction) devices, which have fully integrated back-bias magnets and capacitors for EMC robustness. These all-in-one sensors directly measure the rotation of ferrous gears and are designed for demanding automotive reliability.