This article is based on: D. A. Ramirez, M. M. Hayat, A. S. Huntington and G. Williams, “Theory for spatial distribution of impact-ionization events in avalanche photodiodes,” IEEE Photonics Conference 2012, 2012, pp. 100-101, doi: 10.1109/IPCon.2012.6358508. © 2012 IEEE. Personal use of this material is permitted. Permission from IEEE must be obtained for all other uses, in any current or future media, including reprinting/republishing this material for advertising or promotional purposes, creating new collective works, for resale or redistribution to servers or lists, or reuse of any copyrighted component of this work in other works.

Avalanche photodiodes (APDs) are widely deployed in direct-detection, high-data rate optical fiber communication systems as well as modern lidar systems. Various approaches have been explored to reduce the excess noise of APDs, which is a measure of the uncertainty in the stochastic avalanche gain that the APD offers. These approaches include the use of thin multiplication regions [1] and impact-ionization engineered (I2E) multiplication regions. Both of these structures exploit the dead-space effect to reduce the excess noise. [2],[3] Another approach is to suppress the impact ionization of holes, β → 0, (or electrons, α → 0) to make the hole-to-electron ionization ratio, k = β/α, as disparate as possible, which would also serve to reduce the excess noise factor. As a result, there has been a growing interest in APD structures that suppress the impact ionization of one species of carrier by impact-ionization-engineering the multiplication region. [4],[5] In these structures, the suppression of the impact ionizations by one species of carrier is achieved by judiciously engineering the different layers of the heterojunction multiplication region and the electric field profile therein. A key challenge in understanding the operation of such multi-layer multiplication regions and optimizing their design is the ability to analytically determine the locations at which electrons and holes trigger impact-ionization events. 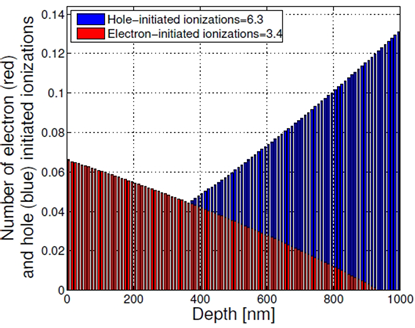 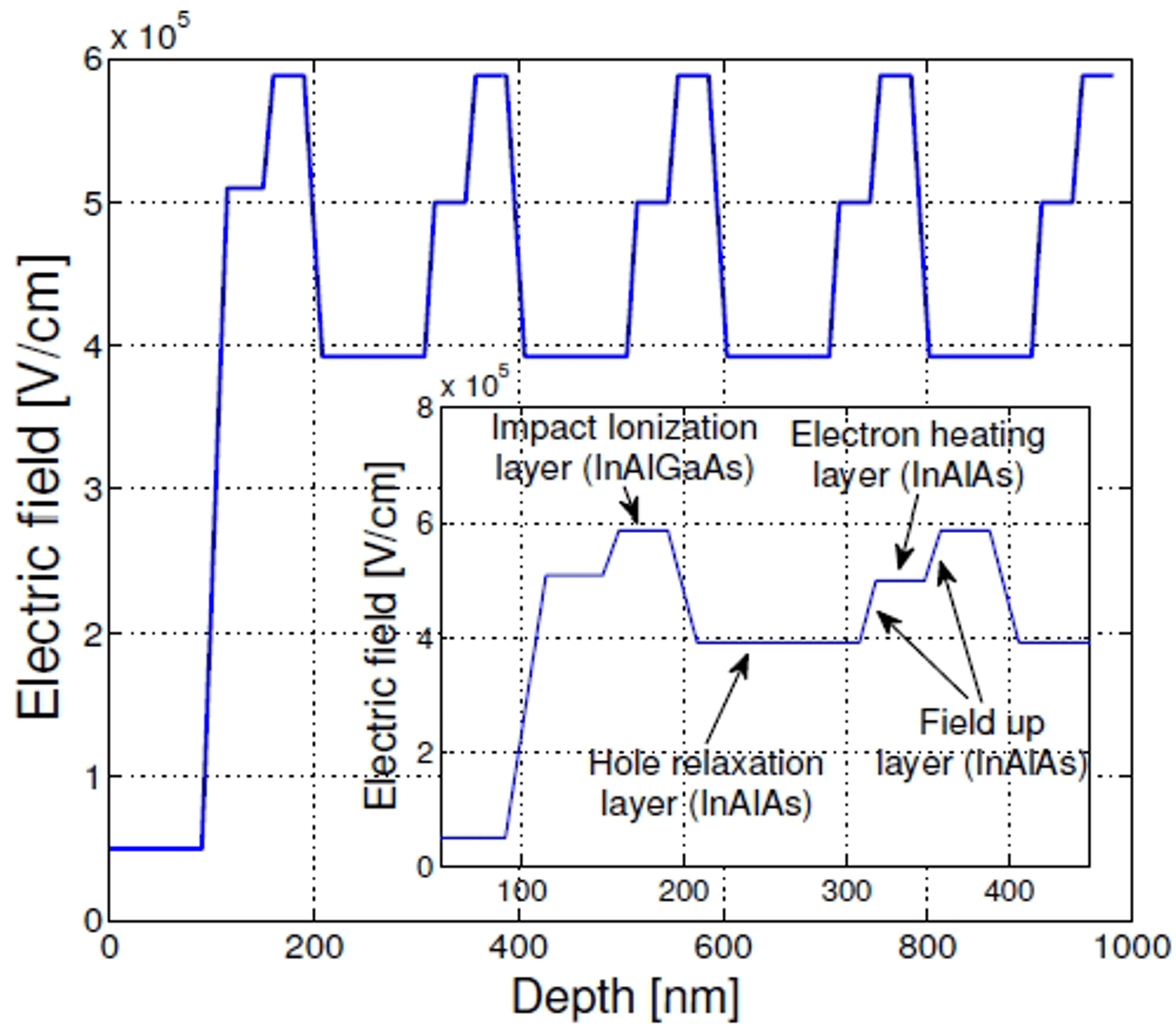 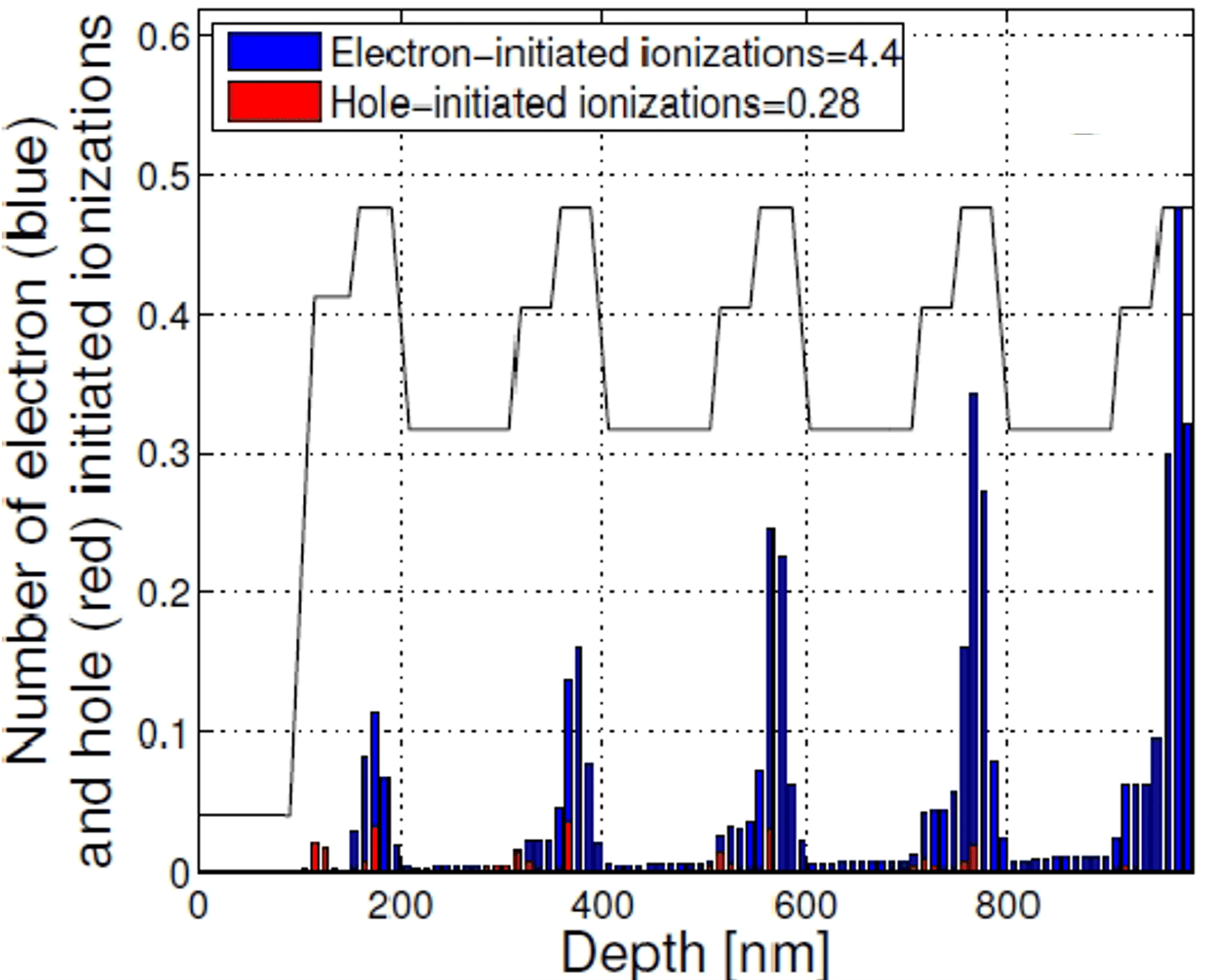 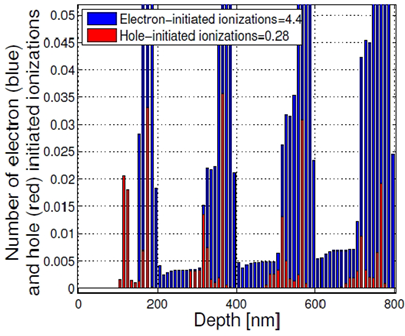 In summary, we have developed an analytical recursive model to calculate the distribution of impact-ionization events triggered by holes and electrons at an arbitrary location inside the multiplication region. The model can be used to simulate a mechanism for suppressing the impact ionizations triggered by one species of carrier and to determine its effect on the distribution of impact-ionizations events.