Omnipolar Hall-effect sensor ICs, often referred to as "omnipolar switches," are a type of digital output Hall-effect latching switches that operate with either a strong positive or strong negative magnetic field. This simplifies application assembly because the operating magnet can be mounted with either pole toward the omnipolar device. A single magnet presenting a field of sufficient strength (magnetic flux density) will cause the device to switch to its on state. After it has been turned-on, the omnipolar IC will remain turned-on until the magnetic field is removed and the IC reverts to its off state. It latches the changed state and remains turned-off, until a magnetic field of sufficient strength is again presented.

An application for detecting the position of a vehicle gear-shift lever is shown in figure 1. The gear-shift lever incorporates a magnet (the purple cylinder). The line of miniature black boxes is an array of omnipolar switch devices. When the vehicle operator moves the lever, the magnet is moved past the individual Hall devices. The devices near the magnet are subjected to the magnetic field and are turned-on, but more remote devices are not affected and remain turned-off. Either the south pole or the north pole of the magnet can be oriented toward the Hall devices, and the branded face of the Hall device package is toward the magnet. 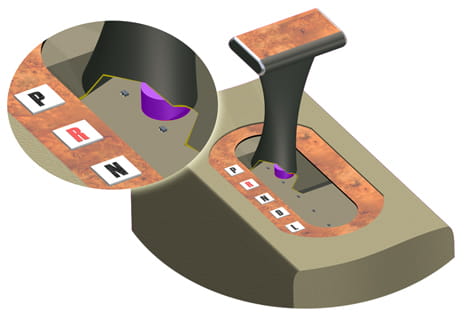 Figure 1. An application using omnipolar switch sensor ICs. The ultra-small Hall ICs switch as the magnet (purple cylinder) moves past them during gear-shifting.

The switchpoint ranges of omnipolar sensor ICs are symmetrical around the neutral field level, B = 0 G, as shown in figure 3. The switchpoints are at equivalent field strengths, but at opposite polarities. For example, assume the positive (south) polarity switchpoints were operate point, BOP(S) 60 G, and release point, BRP(S), 30 G. Then the negative (north) polarity switchpoints would be operate point, BOP(N) −60 G, and release point, BRP(N), −30 G. Latching the latest state prevents the devices from switching while subject to weak fields.

An omnipolar switch turns on in a strong magnetic field of either polarity, and the resulting output signal can be either at logic high (up to full supply voltage,  VCC) or logic low (at the output transistor saturation voltage, VOUT(sat), usually <200 mV), depending on the design of the device IC output stage. An omnipolar switch turns off in a moderate magnetic field, and the resulting output signal is the opposite of the polarity in the on state. Like other types of Hall digital switch, these devices do not switch while the magnetic field strength is in the switchpoint hysteresis ranges, BHYS. In addition, latching the switch state prevents the device from switching while the magnetic field is relatively weak, between the release points,BRP(N) and BRP(S). It is not necessary for the 0 G point to be crossed before switching can occur again. A given switching event can be followed by a switching event of either the same or the opposite polarity.

Although the device could power-on with the magnetic flux density at any level, for purposes of explanation of figure 3, start at the far left, where the magnetic flux (B, on the horizontal axis) is more negative than the north polarity operate point, BOP(N). Here the device is on, and the output voltage (VOUT, on the vertical axis) depends on the device design: high (top panel), or low (bottom panel).

Following the arrows toward the right, the magnetic field becomes less negative. When the field is weaker than BRP(N), the device turns off. This causes the output voltage to change to the opposite state (either to high or to low, depending on the device design).

While the magnetic field remains weaker than BOP(N) and BOP(S) (near B = 0 G, the center of figure 3), the device remains turned-off, and the latched output state remains unchanged. This is true even if B becomes slightly stronger than BRP(N) or BRP(S), within the built-in zone of switching hysteresis, BHYS. 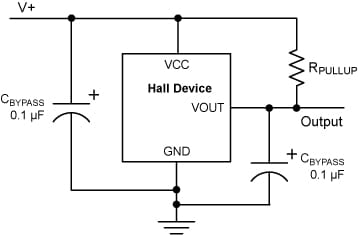 An omnipolar device powers-on in a valid state only if the magnetic field strength exceeds either BOP or BRP when power is applied. If the magnetic field strength is in the hysteresis band, that is between BOP and BRP, the device can assume either an on or off state initially, and then attains the correct state at the first excursion beyond a switchpoint. Devices can be designed with power-on logic that sets the device off until a switchpoint is reached.

Standard Allegro switches are listed in the selection guides on the company website, at Hall-Effect Latches Bipolar Switches.