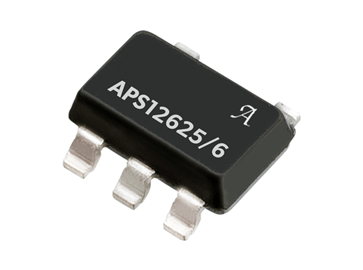 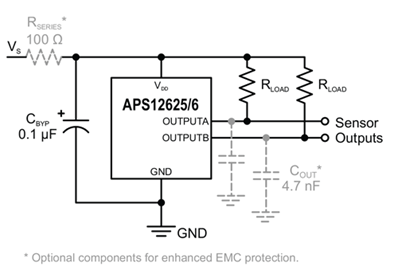 These devices are 2D Hall-effect latches that feature both vertical and planar Hall elements. They are available in all three combinations of vertical and planar Hall elements (XY, ZX, and ZY). All three options feature sensing axes that are orthogonal to one another and provide 90° of phase separation for ring magnets. The phase separation is inherently independent of magnet pole spacing and air gap.

The 2D architecture of these devices simplifies motor and magnetic encoder designs by providing two output options and three sensing axes options in a very small footprint. The APS12625 and APS12626 provide unprecedented flexibility in end-system magnetic design. The two output options include a Speed and Direction output (APS12625 and APS12627) and a quadrature Channel A and Channel B output (APS12626 and APS12628).

A unique feature available on this family allows the host system to restore the correct state after power-cycling the device if the sensor powers up in the hysteresis region (-P option). This reduces the potential accumulation of lost counts/pulses when the device is power cycled with one or more sensors in its hysteresis region. On a single silicon chip, these devices include: three Hall plates (one planar and two vertical), a multiplexer, a small-signal amplifier, chopper stabilization, a Schmitt trigger, and two NMOS output transistors which can sink up to 10 mA. These devices feature a low-voltage design that allows operation from 2.8 to 5.5 V and are available in L temperature range (–40°C to 150°C). APS12625 and APS12626 have been qualified to 175°C junction temperature for 500 hours.

These devices have output updates every 4 µm, 10x faster than the previous generation (APS12625 and APS12626). This enables faster system response times to a pinch event and higher-speed motor and pole pitch ring magnets for greater motor speed resolution. The APS12625 and APS12626 2D Hall-effect latches were developed for functional safety in compliance with ASIL A requirements with an output update rate of 40 µm.

The APS12625 – APS12628 are available in a 5-pin SOT23W surface-mount package (LH) Each is offered in two options for a variety of magnet to sensor orientations. The packages are RoHS compliant and lead (Pb) free, with 100% matte-tin leadframe plating.

The 2D Hall-effect latch family was developed in accordance with ISO 26262:2011 as a hardware safety element out of context with ASIL A capability (pending confirmation) for use in automotive safety-related systems when integrated and used in the manner prescribed in the applicable safety manual and datasheet. 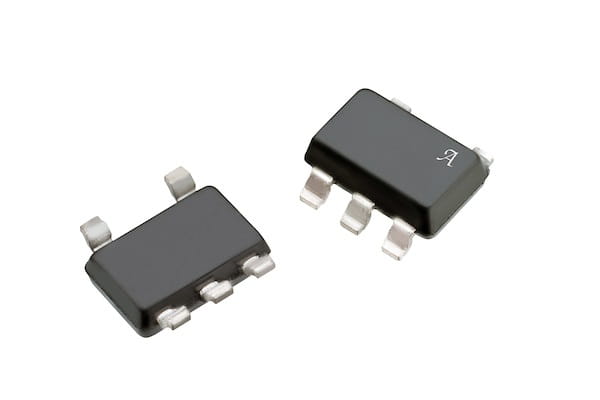 The APS12625/8 are available in a 5-pin SOT23W surface-mount package (LH) Each is offered in two options for a variety of magnet to sensor orientations. The packages are RoHS compliant and lead (Pb) free, with 100% matte-tin leadframe plating.