PWM control is commonly used for LED dimming by controlling the average current through one or multiple LED strings. This is accomplished by varying the duty-cycle of a control pulse at an input to the LED driver device.

Advantages of PEB control over traditional and hysteresis control include:

When the PWM control signal changes logical state, a traditional boost control LED driver turns its boost switching and LED current sinks on or off simultaneously. After a positive-going PWM signal transition, it takes multiple switching cycles for the inductor current to ramp up to its steady-state value. During this time, LED current is primarily drawn from the output capacitor. This draw causes the output voltage to droop and can result in audible noise from the MLCC output capacitor and substantial output voltage ripple.

In addition, this output voltage droop limits how short the PWM signal on-time can be because the output needs adequate time to recover. On-times that are too short will not provide adequate time for the boost converter to replenish the energy in the output capacitor, resulting in output voltage dropout and LED current regulation lost. This severely limits the PWM dimming ratio that can be achieved. 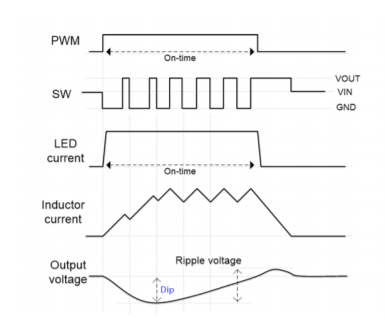 An improvement to the traditional boost control described above is to extend the boost switching for a period after the LED current sinks turn off, effectively pumping up the output voltage slightly past the normal regulation voltage. This is achieved by implementing a hysteretic control loop that increases the Vout regulation voltage by a determined amount whenever Vout drops below a certain voltage. This hysteresis (boost extension) control allows operation with a shorter PWM signal on-time than traditional boost control, resulting in a larger achievable dimming ratio, but still a smaller ratio than is achievable with preemptive boost control. Similar to traditional boost control, the hysteresis control method exhibits large output voltage dips at the start of boost switching that can result in large output voltage ripple and audible noise. 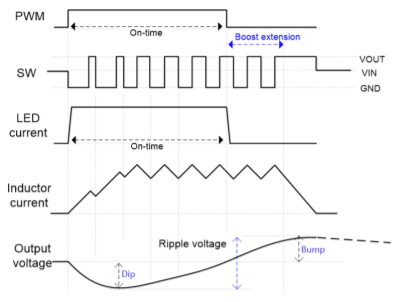 In order to maintain accurate PWM control, an identical PEB delay is imposed after the PWM control signal transitions low. With this control method, both boost switching and the current sinks turn off at the same time. 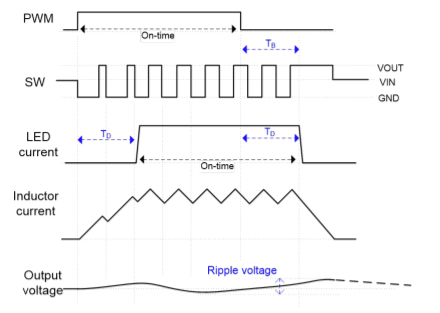 where fs is the switching frequency, and L is the inductance of the boost inductor.

It is ideal to set tPEB so that the LED current sinks turn on at the point when the average steady-state inductor current is reached. tPEB is set by a resistor from the PEB pin of the A8060x to ground. Once tPEB is approximated, the PEB delay vs. PEB resistor value curve in the pre-emptive boost section of the A8060x’s respective datasheet should be used to determine the resistor value.

Equation 1 can be used as a starting point, but it is an approximation, and not all factors that affect the behavior are taken into account. While even non-optimized PEB delay time can significantly improve the output voltage ripple, it is preferable to optimize this delay with some fine-tuning in the laboratory. The following example application demonstrates the results of this optimization.

The following application will be evaluated and optimized for Vout ripple:

Entering Vin, Vout, boost inductor value, and switching frequency into Equation 1 yields an initial tPEB set point of 4.8 μs. Referring to Figure 4, it is determined that a value of 9.6 kΩ from the PEB pin of the A80602 to ground will result in a delay of about 4.8 μs. 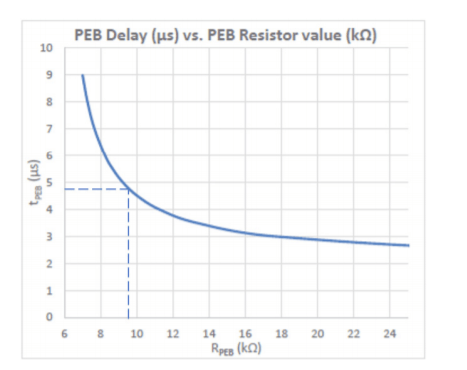 After calculating the approximate PEB delay, the final step is to build and evaluate it in the lab. At this point, tPEB can be optimized to minimize Vout ripple. Figures 5 and 6 show the non-optimized and the optimized PEB delay, respectively. While the longer non-optimized delay results in very satisfactory Vout ripple performance, this ripple can be further reduced by adjusting tPEB so that the LED current sinks turn on as soon as the average inductor current is reached. In this example, the optimization reduced the Vout overshoot from 260 mV to 150 mV.

Audible noise generated by ceramic output capacitors is common in applications with a high Vout ripple. As the capacitor case size is increased, this noise tends to become worse. A decrease in the necessary output capacitance allows the use of smaller case size capacitors, reducing audible noise levels. The large Vout ripple, as is demonstrated with the hysteresis boost control trace in Figure 7, can result in audible noise in some applications. The reduced Vout ripple that results from PEB control solves this issue. 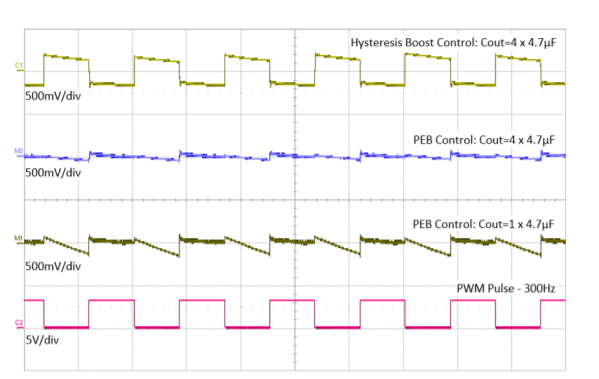 The A8060x family is a versatile, feature-rich family of LED drivers that are ideally suited for automotive applications such as infotainment backlighting, head-up displays, and interior/exterior lighting. They are automotive AEC-Q100 qualified, offer extensive fault protection features, and have a wide input voltage range to meet load dump, stop/start, and cold crank requirements.

The ALT80600 and A80603 combine a switching converter with an integrated boost MOSFET, while the A80601, A80602, A80604, A80605, A80606 drive an external boost MOSFET for greater output power. The ALT80600, A80601, A80603, and A80604 have four LED current sinks, while the A80602, A80605, and A80606 have six current sinks. Some or all of these current sinks may be connected in parallel for higher current applications. Each of these devices can be configured in a boost or single-ended primary-inductor converter (SEPIC) topology to cover a wide range of application configurations. The switching converters are designed for low EMI, offering features including programmable switching frequency, controlled switching slew rate, and programmable dithering.

The A8060x family’s pre-emptive boost control allows for a substantial PWM dimming ratio of up to 15,000:1. If further dimming is desired, the A8060x’s analog dimming feature can be used to increase the maximum dimming ratio to 150,000:1.

To learn more about the A8060x family and ALT80600 visit www.allegromicro.com/led-drivers-for-backlighting